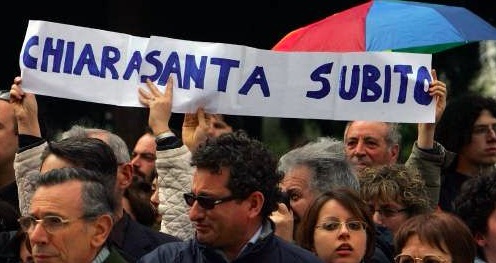 Light Shed on the Spirituality of Chiara Lubich, its Founder, Reflects on her Beatification.

(This article was published on two reference sites which I thank: il sismografo, site with an international audience specialising on vatican information, and lenversdudecor, a website specialising in the fight against sectarian-based abuses, created by Xavier Léger(*)

After so many other new communities called into question because of their founder or of certain sectarian aberrations, the great Italian lay movement known as the Focolare (Work of Mary) is in its turn in the eye of the storm. In addition to the paedophile crime cases that led to recent resignations within the movement is the publication of Renata Patti’s(1) book that causes turmoil  (disarray). (Disarray) A turmoil equal to the issue at stake. The Focolare, with a presence in 184 countries around the world, has (a membership of) two million members. It is thus a “power” within the Catholic Church that expects the forthcoming beatification of its founder as a form of consecration. However, some spiritual writings by Chiara Lubich are proving very problematic.

The author of the book, Renata Patti, was eleven years old when she first came into contact with the Focolare, which played a part in the familiar world of her school and her parish. The priests who regularly saw to the spirituality of this lay movement a possible educational path of sanctity. And Renata’s parents, convinced that it was an extracurricular activity, were not concerned. The book revisits the author’s 40 years of life within this movement, from her adolescent idealism, her decision to take the step to eighteen years of perpetual vows, to 47 years… only three years before resigning and permanently leaving the movement. In the meantime, she would know and endure, to “please God”, all the suffering of spiritual abuse and of the most classic abuse of power. With the associated episodes of depression, psychiatric consultations, separation, disability and so on.

All the Ingredients of Sectarian Abuses

In this testimonial, we find all the ingredients of sectarian abuse as identified elsewhere in other new communities that have had their “spotlight in the news”, subject of accusations made by the victims and occasionally of canonical proceedings that could lead to the founder’s dismissal. Absence of vocational discernment, break with the family environment judged to be “incapable of understanding”, exhausting days denied any free time, domestic tyranny, harassment and suffering, total obedience to the person responsible who combined the functions of a superior in the community, teacher, organiser of daily activities for all, sole confidante and spiritual counsellor and so on, permanent and exclusive reference to the founder’s writings, incentive to give all one’s belongings to the community in the spirit of poverty with no guarantee of return if she were to leave, censoring what was read and of the films viewed, control over every activity of every member through drafting, at the end of every day, the so-called “schemetti”. (Thus, on) That is a pre-completed form, each Focolare would write the details of her day, time spent working and resting, reading, a list of all her expenses, medicines taken, people met and the reason for their meeting, letters received and which had to be handed in. Once these had been handed in at the end of the week, the files were read by the people in charge, summarised then forwarded to the movement’s head office. A practice which violates a person’s dignity and freedom and which the Pontifical Council for the Laity has officially asked be abolished by letter of 3 June 2020 addressed to the new president Maria Voce.

A concept of unity that ignores personalities.

But the characteristic “trademark” of the world described by Renata Patti is found elsewhere. In the relationship that each Focolare member maintained – until her death in 2008 – with the founder affectionately called “Mamma Chiara”. The Focolare members are encouraged to write to share with her their joys or their doubts. And Chiara answers, through her secretary, with brief letters that always refer, one way or another, to the foundations of her spirituality, to the two concepts that make up the life in the movement.

With respect to this, Renata Patti wrote: “I tried to adhere, with all my heart, all my soul and all the strength of Chiara Lubich’s spirituality that could be summarised by the concepts of the unity and of “Jesus forsaken”. (…) Unity unfortunately not lived as such, that is, as “communion” but more as absorption and cancelling my own personality to the benefit of the authority, of the group within which one must merge oneself at every level. (…) The concept of Jesus forsaken offers those responsible a means to obtain passive obedience and total submission. Their spirit ends by substituting the breath of the Holy Spirit and the individual conscience, which no longer freely expresses itself to the point of being suffocated.”

“It really is a system…”

But there’s more, and it is worse. In a document dated 23 November 1950, Chiara Lubich wrote: “Every soul of the Focolare members should be an expression of me and nothing else. My Word holds all those of the Focolarines and Focolare members. I am the synthesis of everything. When I appear this way, they should thus allow themselves to be produced by me, to commune with me. (…) To live the life that God gave them, they must nourish themselves from the God that lives in my soul. (…) So I can communicate everything and I draw from deep within me, and so from God and me, everything I can. And the truth reveals itself. I expect from my own that they are as perfect as the Father, that they are love in actions and nothing else. If they are different, I will abandon them by also withdrawing from them that which they believe they have. Like Jesus. Unity is thus the Unity and one soul must live: mine and that of Jesus who amongst us is in me.”

A belief that nourished the growth and the operation of the movement. Renata Patti conjures up her childhood when she was shown a photo of the founder and was told: “You are only at one with the one who speaks, lose yourself completely in her” or “He who sees Chiara sees the father.” And the author comments: “Our superiors taught us to amalgamate within ourselves an attitude of adulation for Chiara Lubich and for every authority she designated within the structures of the Work.” In the postface to the book, Father Pierre Vignon writes: “It bears repeating, it is very much about a system and not about an unhappy personal experience faced by Renata. It is truly a system, that is, an entire movement that is at issue, since the Focolare are convinced of the unsustainable belief regarding the Christian tradition that their “sanctity” is community, which is, they believe, collectivist. They carry out a “collective and individual cloning”.  It is genuine heresy. These people, shielded by their high representatives in the Roman Catholic Church, think this way. Salvation, for them, is not in the Christ offered them by the Church, rather it is they, in their spiritual pride, who must save it.”

Confessions of a Cardinal

This is a splendid (examination) analysis, it must be said! In his book Orgoglio e pregiudizio in Vaticano – Le confessioni di un cardinale sulla Chiesa di ieri e di oggi(2) [Confessions of a Cardinal], published in 2007 under Benedict XVI’s pontificate, Olivier le Gendre attributed statements of “sectarian abuses”, then formulated against four principal movements, into his Cardinal’s mouth. The four movements were the Focolare, the Neocatechumenal Way, the Opus Dei and the Legionaries of Christ. He had him saying: “Some of these movements demand a great deal of their members: obedience, availability, exclusivity, significant financial contributions, reverence with respect to the founders and those in charge. One is left with two opinions when faced with these demands. The first is to marvel at the generosity of these Christians who wanted to live a life committed to faith and to spare no effort in working for this cause. The second is to wonder if these demands don’t go too far, if the only ones who benefit are the leaders, if they are presented too urgently, if they are imposed by undue mental pressure.” Then, while stressing the need not to cover the accusations brought against so many abuses and the urgent need to investigate so as to gain a clear view of the reality of the situation, he reveals that he and, amongst others, Cardinal Martine and Danneels and a few French and American Bishops had alerted the Pope, the Secretary of State and the Pontifical Council for lay persons, and so on.

United in the same “santo subito (saint right away)”

Two decades earlier, on 19 August 1984, Pope John Paul II visited Chiara Lubich at Rocca di Papa, the movement’s central headquarters. “You are a small Church…” The author asked, however: “But isn’t this ‘little Church’ an alternative Church? At the time my testimony was being published, I thought the question was justified.”

These are the file documents provided by the book.(3) It will be recalled that the funeral of John Paul II on 8 April 2005 was marked by the appearance, in the crowd, of placards with the words “santo subito (saint right away)” asking for the immediate canonisation of the Polish Pope. An initiative of the Focolare that owed him so much. And that today, in exchange, it is expect that his successor Francis will beatify their founder. To achieve her dream: “One day the Church will awaken as Focolare.”

From experience, I know the accusations this type of book and note examines are likely to fuel: a desire to weaken and defile the Church, an attack on the reputation of “new communities”, the memory of a woman of great charisma, Chiara Lubich, even of an exceptional Pope, John Paul II, whose sainthood has been recognised by the Church. While in reality, the author’s clear intention is for “the healthy part of the Focolare movement to enter into a dialogue and to initiate actions so that what happened to me does not happen again.”  Thus a book to serve the movement itself and the Church, in the name of the truth.

PS. Quite by chance, I published this review at the same time the Focolare’s General Assembly was being held. And the current but outgoing president, Maria Voce, uttered the same reference to a “collective sanctity” in the movement that remains ambiguous… unless the movement sees itself as the Church.

(*) The article contains a photo from 9 February 2001 in which Chiara Lubich can be seen on a visit to the Centre for Higher Studies of the Legionaries of Christ in Rome, accompanied by a sulphurous Marcial Maciel. Xavier Léger commented: “The two founders wanted to create connections between their respective movements in response to a request by John Paul II, who wanted that new communities in the church to collaborate so as to better respond to the challenges of the New Evangelisation. XL”